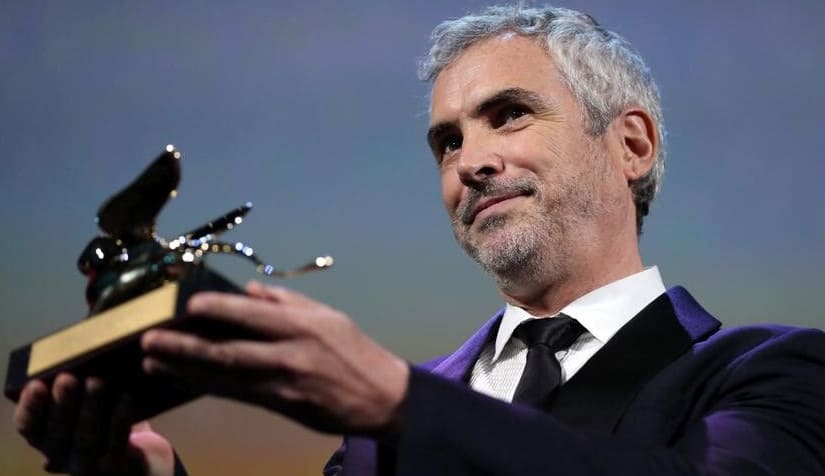 In 2013 when he left the 70th Venice International Film Festival he went on to win an Oscar for best director in the 86th Academy Awards, in the same category a BAFTA award, A Golden Globe and many others.

After his 2013 Gravity, a new generation Odyssey in Space, Alfonso Cuaron return to Earth and make a film in Mexico, a Black & White nostalgic film that bring him back in memories to his roots in Mexico of early 1970s. ‘Roma’ where the film take place is a Residential Middle Class district in Mexico City. The film is in Mexican Spanish not since 2001 in his famous film ‘Y Tu Mamá También’ that he used his native language. ‘Roma’ is a very personnel film centered around two domestic workers, of Mixteca origin who work and live in a middle class family of Roma district in Mexico City. The main domestic worker character is based on Lobi, a servant that actually worked for his family in the early 1970s.

Upon receiving his award Cuaron expressed his inner feelings “This award and this festival are incredibly important to me,” He moved on to thank all the people who worked with him and in particular actresses Marina De Tavira, Yalitza Aparicio and Nancy Garcia “for your courage, generosity and immense respect in portraying the women who raised me,” After thanking his producer David Linde he also thanked Netflix’s Ted Sarandos and Scott Stuber.

This triumphal win was not only to the Director who already enjoyed a great success with his previous films but also to Netflix. Because after the problem in Cannes festivals in 2017 where Netflix and Amazon were allowed to compete in Cannes but was later opposed from the the Federation of French Cinemas who felt that this steaming models was effect the film industry because they were not going to be released in French theaters. Cannes Festivals announced in statement that Netflix will not be competing in 2018.

“The Festival de Cannes is aware of the anxiety aroused by the absence of the release in theaters of those films in France. The festival asked Netflix in vain to accept that these two films could reach the audience of French movie theaters and not only its subscribers. Hence the festival regrets that no agreement has been reached.”

Not be able to attend this year Cannes Festivals, it was very important to Netflix to use Cuaron’s Roma to infiltrate the international festivals. This was done by introducing a new model where if films produced by them are allowed to enter competition Netflix will agree to a limited theatrical distribution by cutting short the period between theatrical and streaming release.

The key formula is to work with the best talents in the industry with a high quality non-English films that they a have a big chance to win major awards, relying on film d’auteur without any specials 3D effects or blockbusters stars, in the prestigious festivals.

One of the Unique Music Festivals. To read more click zouhourfestival.com