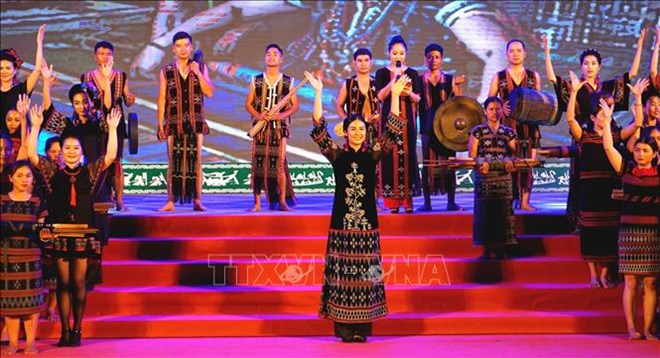 Thua Thien – Hue (VNA) – The culture, sports and tourism festival of ethnic minority groups along the Vietnamese – Lao border wrapped up in A Luoi district of the central province of Thua Thien – Hue on May 19.

Speaking at the closing ceremony, Vice Chairman of the provincial People’s Committee Nguyen Dung highlighted the significance of the event, saying that it contributed to the promotion of the solidarity and friendship between the two nations.

Activities in the festival included exhibitions of the localities’ culture and tourism products, arts performances, shows of traditional costumes and brocade making, reenactment of traditional festivals and customs, and a culinary competition. The programme also featured traditional sports of local ethnic groups such as pole pushing, tug of war, and crossbow shooting.

On the occasion, many organisations and individuals received certificates of merits of the Ministry of Culture, Sports and Tourism, the Border Guard High Command, and the local authorities for their efforts to preserve and uphold cultural values of ethnic minority groups living in the border areas.

The event attracts about 600 artisans, artists, and amateur athletes from both sides. They came from Vietnam’s central and Central Highlands provinces of Thua Thien-Hue, Quang Tri, Quang Nam, Quang Ngai, and Kon Tum, and the Lao provinces of Attapeu, Sekong, Savannakhet, and Salavan.

It aimed to honour and introduce the special cultural values of ethnic minorities while enhancing the solidarity, friendship, cooperation and cultural exchange between border provinces of Vietnam and Laos.

The festival also contributed to promoting potential and strengths for culture, sport and tourism development, culture heritages in the central and Central Highlands regions to domestic and foreign visitors.-VNA

Where You Can Get Paid As A Social Media Influencer Online.

What are the factors that affect  foreign direct investment(FDI)?

Sell Photos In One Photos Gallery Through TOP.

Easier For Writers To Earn With TOP Platform

Why TOP Is Your Best Shot For Online Reputation Repair.

3 Reasons To Register To Review With TOP.

Why Go With TOP For Any Translation Services.

3 Reasons To Go With TOP For Any Online Translation of Documents.

4 out of 5 people on antidepressant drugs are unaware of the side effects.

Diwali “Festival of the Lights” at the Bankhead Theater.