Latest Blogs
Home FESTIVALS Bluedot festival review – up, up and away for musical trip to outer limits 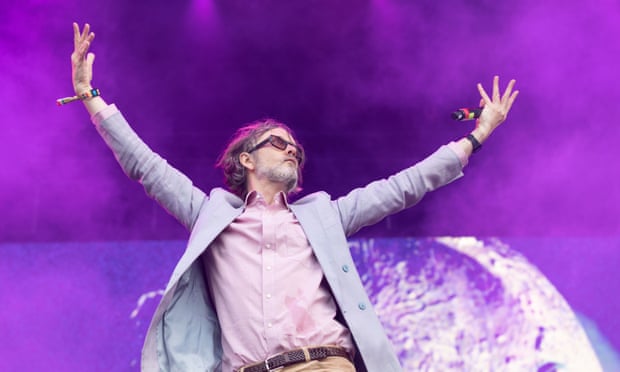 Bluedot festival review – up, up and away for musical trip to outer limits

‘We are going to travel to the moon this evening,” proclaims Jarvis Cocker as he walks through the crowd while a recording of the Apollo 11 launch countdown plays. Whooshes and whirrs then emanate from the stage as he performs a rare outing of the 1992 Pulp B-side Space.

Located at Jodrell Bank Observatory, Bluedot is a weekend-long monument to the 50th anniversary of the moon landing. There’s a replica lunar module and Helen Sharman gives a talk on being the first British astronaut. You can smell space at one stall – a bit nothingy, although the Milky Way is quite fruity and Mars pungent and sulphuric. There’s even an experiment that bounces voice messages from the artists and the audience off the moon and plays back the warped versions. Here, science is as culturally celebrated as music, which makes for an endearing, unique mix of people and their passions – a balance that stretches to being wholesome without feeling sterile.

Jarvis doesn’t quite follow through on his promise of ascension into outer realms, but instead plays a set of mostly new, unreleased material from his new Jarv Is project. The latest single Must I Evolve? unfurls with pulsing repetitions, and House, an on-the-nose ode to house music, oozes galloping, elongated grooves. “Whoever the next Tory leader is, I dedicate this to them,” he says, announcing Cunts Are Still Running the World as a mud-caked crowd partake in a hearty, sweary singalong.

Elsewhere, Squid play a brilliantly potent blend of free-form no wave and hyper-taut post-punk, Jon Hopkins’ safe rave stuffs the tent to bursting point and Audiobooks play a compelling set of oddball electro-pop. The daytime lineup often doesn’t match the excitement or quality of the evenings, but Kraftwerk’s only UK performance of the year turns out to be a perfect headline set.

From the opening gargles of Numbers, they sound utterly pristine. It’s a riotously dance-heavy set at times, too. A remixed Computer Love weaves in and out of its sweet, almost symphonic pop melody, crashing around fizzing beats and crackling electronics. It’s thrilling to hear them tweak their own music in a way that feels flawlessly tight yet expansive and flowing. Similarly, Radioactivity palpitates with new life as it reaches almost euphoric levels and Tour de France seems to last as long as the race itself but never loses an iota of momentum.

With no new music in 16 years, Kraftwerk’s current pursuit of modernity seems to exist more in perfecting the purity of their sound and distilling their own back catalogue into sparkling new variations. When they play a pulsating and propulsive Autobahn, it’s staggering to think it’s now 45 years old. Only five years separate the band’s own ground zero moment and the moon landing – and both stand as futuristic accomplishments achieved during times of relatively primitive technology. Five decades on, these achievements still seem almost inconceivable.

For all the celebrations of futuristic pursuits past and present, the closing set from New Order ends the festival on a beautifully poignant note. Ian Curtis is buried just a few miles away from the site, and the band’s closing finale of Atmosphere and Love Will Tear Us Apart shows that listening to Joy Division’s music in the endless drizzle can feel just as otherworldly as Bluedot’s more explicitly spacey visions.

… we have a small favour to ask. More people are reading and supporting The Guardian’s independent, investigative journalism than ever before. And unlike many news organisations, we have chosen an approach that allows us to keep our journalism accessible to all, regardless of where they live or what they can afford. But we need your ongoing support to keep working as we do.

The Guardian will engage with the most critical issues of our time – from the escalating climate catastrophe to widespread inequality to the influence of big tech on our lives. At a time when factual information is a necessity, we believe that each of us, around the world, deserves access to accurate reporting with integrity at its heart.

Our editorial independence means we set our own agenda and voice our own opinions. Guardian journalism is free from commercial and political bias and not influenced by billionaire owners or shareholders. This means we can give a voice to those less heard, explore where others turn away, and rigorously challenge those in power.

“There is nothing to writing. All you do is sit down at a type writer and bleed.”- Ernest Hemingway

Ways For Social Media Influencers To Make Some Money.

4 Reasons All Freelancers Should Be Working With TOP.

Getting Paid For Starting As An Online Reviewer.

Best Way To Sell Photos From Home For Cash.

TOP Gives A New Opportunity To Earn With Its Ebooks Library.

Trust TOP To Help Repair Your Online Reputation At Any Time.

One Quick Way To Take Care Of Online Reviews.

2 Benefits You Get When Partnering With TOP For Online Reputation Building.

2 Good Reasons To Consider Getting Translation Help From TOP.

Work on cell response to oxygen gets medicine Nobel.

Norway to allow dual citizenship from 2020.