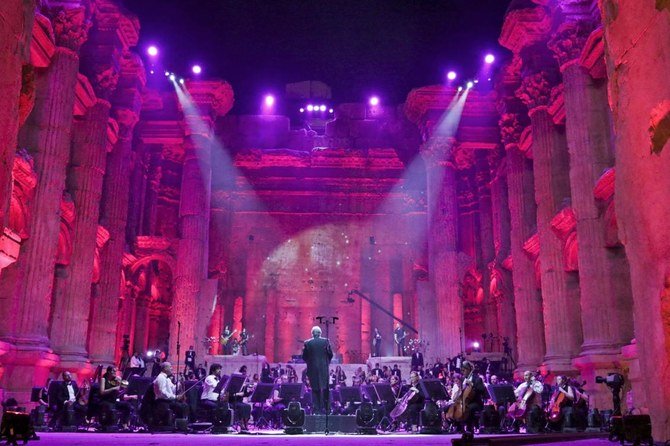 A philharmonic orchestra performed to spectator-free Roman ruins in east Lebanon Sunday, after a top summer festival downsized to a single concert in a year of economic meltdown and pandemic.
The Baalbek International Festival was instead streamed live on television and social media, in what its director called a message of “hope and resilience” amid ever-worsening daily woes.

The night kicked off with the Lebanese philharmonic orchestra and choir performing the national anthem, followed by Carmina Burana’s “O Fortuna,” a 13th century poem set to music.

The program, which ran for just over an hour, included a mix of classical music and rock and folk tunes by composers ranging from Beethoven to Lebanon’s Rahbani brothers.
Held in the open air and conducted by Harout Fazlian, the 150 musicians and chorists were scattered inside the illuminated Temple of Bacchus, as drones filmed them among the enormous ruins and Greco-Roman temples of Baalbek.
Festival director Nayla de Freige told AFP most artists performed for free at the designated UNESCO World Heritage site.

The concert aimed to represent “a way of saying that Lebanon does not want to die. We have an extremely productive and creative art and culture sector,” she said.
“We want to send a message of civilization, hope and resilience.”
Baalbek itself became a militia stronghold during Lebanon’s 1975-1990 civil war, but conservation and tourism have revived the ruins over the past three decades.

Lebanon is known for its summer music festivals, which have in past years drawn large crowds every night and attracted performers like Shakira, Sting and Andrea Bocelli.
Other festivals have not yet announced their plans for this year.

Lebanon has recorded just 1,873 cases of COVID-19, including 36 deaths.
But measures to stem the spread of the virus have exacerbated the country’s worst economic crisis since the 1975-1990 civil war.

Since economic woes in the autumn sparked mass protests against a political class deemed irretrievably corrupt, tens of thousands have lost their jobs or part of their income, and prices have skyrocketed.
Banks have prevented depositors from withdrawing their dollar savings, while the local currency has lost more than 80 percent of its value to the greenback on the black market.

Here at The Online Publishers “TOP”, we dedicate ourselves to helping our clients place backlinks on authority sites with heavy traffic. Our experts are highly experienced in handling tasks that entail creating unique content and ensuring relevancy for every group of backlinks created.