Latest Blogs
Home MUSIC What is the music in Netflix’s ‘I’m Thinking of Ending Things’, and what does the ballet scene mean? 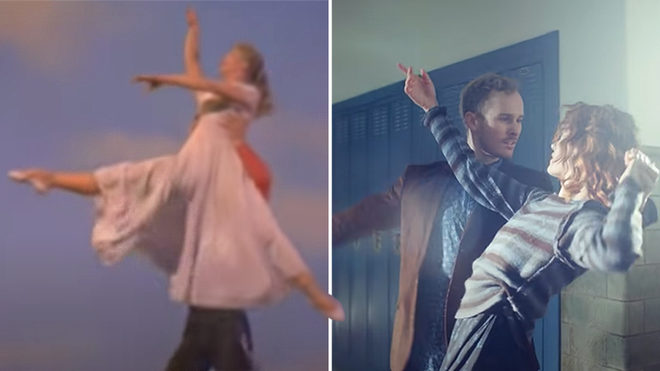 What is the music in Netflix’s ‘I’m Thinking of Ending Things’, and what does the ballet scene mean?

Charlie Kaufmann’s made-for-Netflix debut is every bit as strung out, metaphysical and frown-makingly philosophical as you might expect from the ‘Being John Malkovich’ writer – but will the music help us make sense of it? We’ll give it a go…

Everyone on the Internet is saying “I’m Thinking of Ending Things”.

But luckily, it’s not our Hinch dates giving us all an unexpected dumping, but rather the latest Netflix film doing the rounds.

Written by Charlie Kaufman who brought us Eternal Sunshine of the Spotless Mind (2004) and Being John Malkovich (1999), I’m Thinking of Ending Things is about a protagonist girlfriend meeting her recent-ish new boyfriend’s parents and how such an event can bring about existential fears around the struggles of life. In a nutshell.

We won’t say too much more. It’s beautifully shot, has plenty of clever references, and it’s over two hours long, but – we’re just not really sure what happened.

Now, with that being said we do have a spoiler warning carried safely at our side (stop reading if you haven’t yet watched and don’t want us to ruin it for you). We’re going to pull on our snow boots (see – spoiler!) and try to wade through the film’s meaning, through the lens of its music.

Read more: When is ‘Rebecca’ on Netflix? Cast, trailer, soundtrack and release date >

The Brooklyn-based composer has a string of awards and noms to his name, and he works with orchestras and electronics equally comfortably. His CV includes Netflix’s The OA and Tales of the City among other projects.

For I’m Thinking, he opts for a mix of electronic and original orchestral music, and a stand-out moment is the ballet scene in the finale. Wadley has penned a Stravinsky-esque original score to soundtrack the high school lockers-edged ballet solo.

“I have a classical background and I got to exercise those muscles again,” Wadley told Composer Magazine. “Composing music that exists on its own and not as an accompaniment so that it can have its own moment to shine was super exciting to me.”

What does the ballet scene in ‘I’m Thinking of Ending Things’ mean?

In the way Kaufmann’s film references other films and literature, Wadley describes being keen to reference establishment ballet in the climactic ballet scene – and it’s very apparent.

New York Ballet’s Peter Walker choreographed the scene and described it as an unexpected – but ultimately necessary – release of tension the winding film has created up until that point.

“It’s this weird thing where it actually does the opposite of what you feel it should,” he tells Vulture. “We’re able to release some of that tension, and then it builds back up to the actual conclusion of the film.”

The scene is the culmination of a horror-esque experience the protagonist, Lucy (she confusingly has a couple of other names thrown at her throughout the film) has in the home of her boyfriend, Jake’s parents. And the struggle to get home, the long journey back through the snow, and the surrealist stop-offs – small-town ice-cream shop, Tulsey Town and Jake’s old high school – are all alluding to the existential struggles of life, love and mundanity worthy of 100+ of these articles.

Like Walker says, what the ballet seems to do is offer a juxtaposition, an unexpected escape from the horror tropes Kaufmann has set up in the parents’ house. The glimpses of rare beauty in life, perhaps?

‘Oklahoma!’ dream ballet scene and ‘I’m Thinking of Ending Things’ ballet scene
“We’re getting late in the film by the time we get to that, and the janitor is approaching his death [and experiencing] this sort of sweeping, beautiful moment of emotion or longing,” the film’s production designer, Molly Hughes, told Vulture. “It’s very hard to articulate something that’s actually just about a feeling; the whole sequence, to me, is this overwhelming swell of longing and regret played out in a dance.”

A recurring character in I’m Thinking of Ending Things is an old janitor – presumably Jake – and he watches a high school staging of Oklahoma! in some of his scenes. The ballet scene at the climax of the film reflects the ballet scene in the 1943 musical – the epitome of romance. That’s what Kaufmann gives us with the ballet – the epitome of romance – and that’s what Jake has seemingly never experienced and only ever fantasised about.

The ballet is such a contrast to the dark scenes that represent janitor Jake’s mix of memories and fantasies.

“This movie is dealing with somebody’s experience of absorbing things that they see and how they become part of his psyche,” the film’s director Charlie Kaufmann told IndieWire. “So this was in some ways how this person might have fantasised it out.”

“His” psyche. So the movie is about Jake, really. And when you switch from the idea of Lucy as protagonist, to Jake as protagonist – is Lucy just a ‘device’, to use the film buff lingo? – the film seems to be more about Jake’s experience of life, longing, and fantasies – which the climactic ballet very much represents.

“I’m not really big on explaining what things are,” Kaufmann warned in the IndieWire interview. “I let people have their experiences, so I don’t really have expectations about what people are going to think. I really do support anybody’s interpretation.”

Maybe it’s best we leave a little mystery, then, and just let the music and beautiful ballet wash over us to help us ponder life’s wonder…

I’m Thinking of Ending Things is out now on Netflix.

Online reputation repair involves a number of steps and methods. First of all, finding out the main cause and issue that lead to negative online reviews and content, and fixing the related problem, is key to avoiding additional negative reviews and eliminating further damage to online reputation.