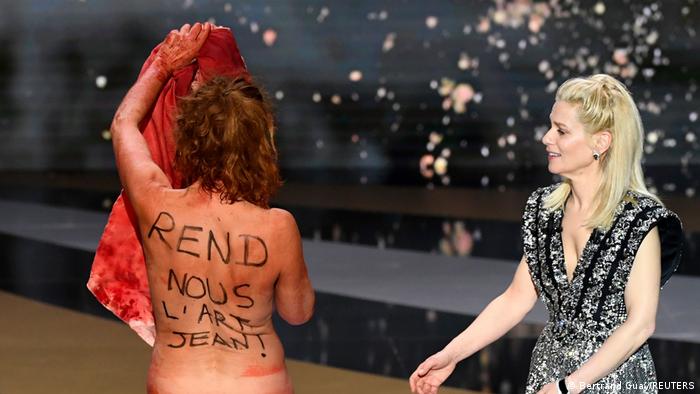 Corinne Masiero stripped live onstage at the Cesar film awards in Paris to demand more support for France’s cultural sector. Cinemas have been shut for three months because of the latest coronavirus shutdown.

A French actor has staged a naked protest at France’s top movie awards in an effort to demand that the government do more to help the shutdown-ravaged cultural sector.

Corinne Masiero, best known for her lead role in the 2012 drama Louise Wimmer, had been asked to present the Cesar award for best costumes.

But the audience of the socially distanced ceremony got more than they bargained for when the 57-year-old stripped live onstage to reveal messages to French Prime Minister Jean Castex on her back and torso.

They read: “No culture, no future” and “Give us back art, Jean.”

Cinemas and theaters have been shut in France since October because of the latest coronavirus shutdown.

Masiero was not the only French film star to hit out at the government. 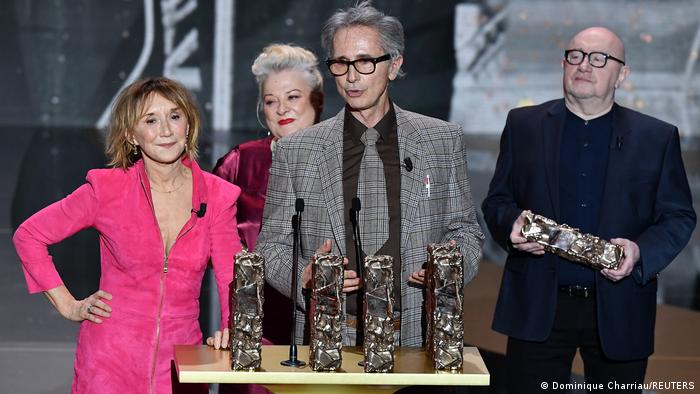 The Cesar awards are France’s answer to the Oscars

Stephane Demoustier, who picked up the Cesar for best screenplay for The Girl With Bracelet, also said it was time to reopen movie theaters.

“My children can go to Zara but not the cinema,” he said. “It’s incomprehensible.”

The calls follow a protest on Wednesday that saw demonstrators occupy three of the country’s four national theaters to call for them to be reopened.

There is growing frustration in France that shops and businesses have been allowed to open their doors, while cultural venues remain shuttered.

The Cesars are France’s answer to the Oscars.

The best film award at the ceremony was picked up by Albert Dupontel’s Bye Bye Morons, while best foreign film went to the Danish feature Another Round.

Last year, the entire jury resigned following uproar about director Roman Polanski’s two awards for his film An Officer and a Spy.

Stars  walked out of the ceremony because the Polish director is wanted by authorities in the United States after he fled the country in 1978 to avoid sentencing on a charge of unlawful sex with a minor. Multiple women have come forward with accounts of sexual assaults by Polanski while they were teenagers.